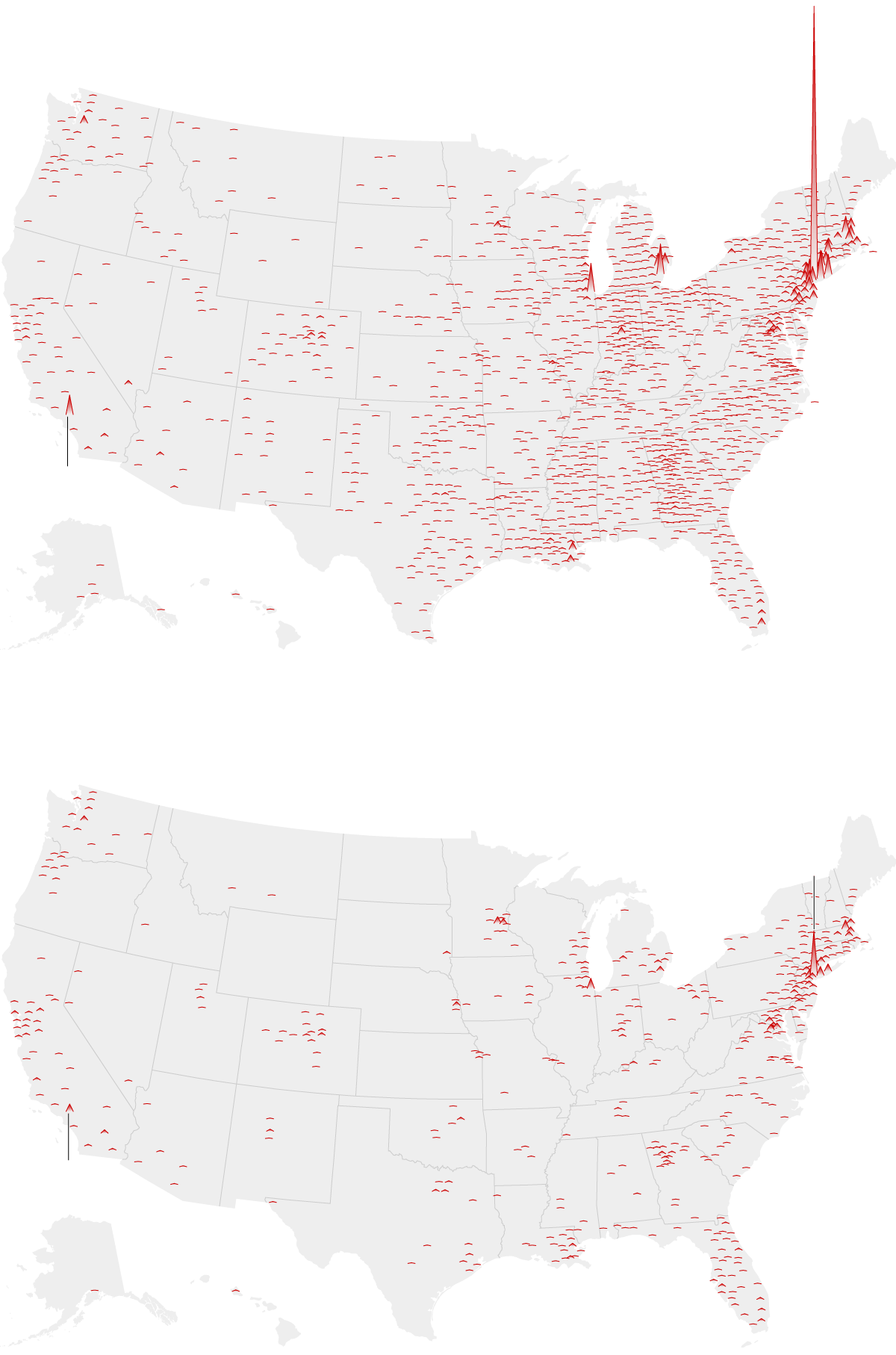 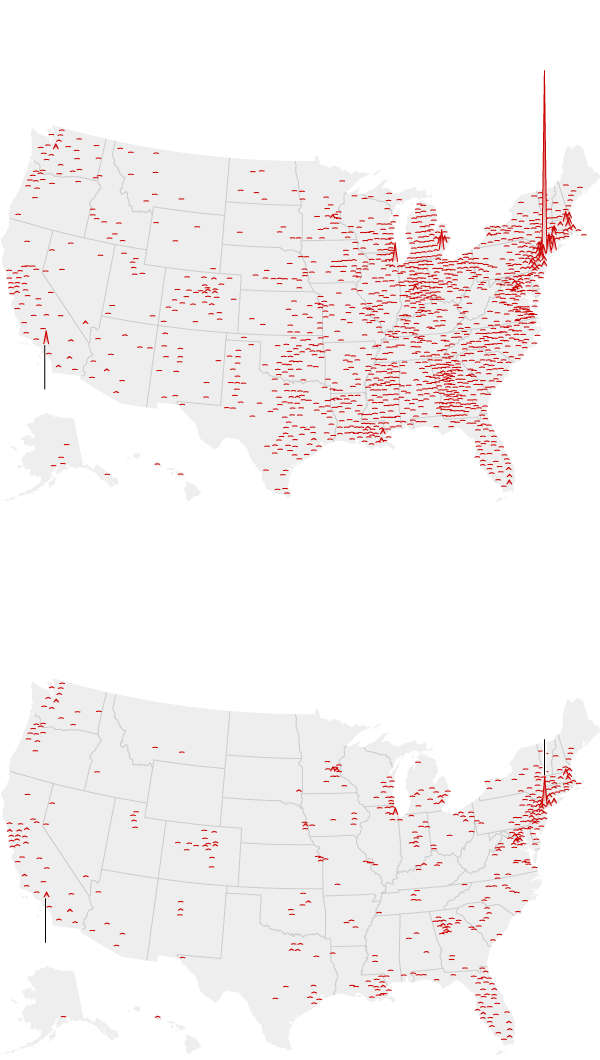 If the United States had begun imposing social distancing measures one week earlier than it did in March, about 36,000 fewer people would have died in the coronavirus outbreak, according to new estimates from Columbia University disease modelers.

And if the country had begun locking down cities and limiting social contact on March 1, two weeks earlier than most people started staying home, the vast majority of the nation’s deaths — about 83 percent — would have been avoided, the researchers estimated.

Under that scenario, about 54,000 fewer people would have died by early May.

The enormous cost of waiting to take action reflects the unforgiving dynamics of the outbreak that swept through American cities in early March. Even small differences in timing would have prevented the worst exponential growth, which by April had subsumed New York City, New Orleans and other major cities, the researchers found.

“It’s a big, big difference. That small moment in time, catching it in that growth phase, is incredibly critical in reducing the number of deaths,” said Jeffrey Shaman, an epidemiologist at Columbia and the leader of the research team.

How Earlier Control Measures Could Have Saved Lives 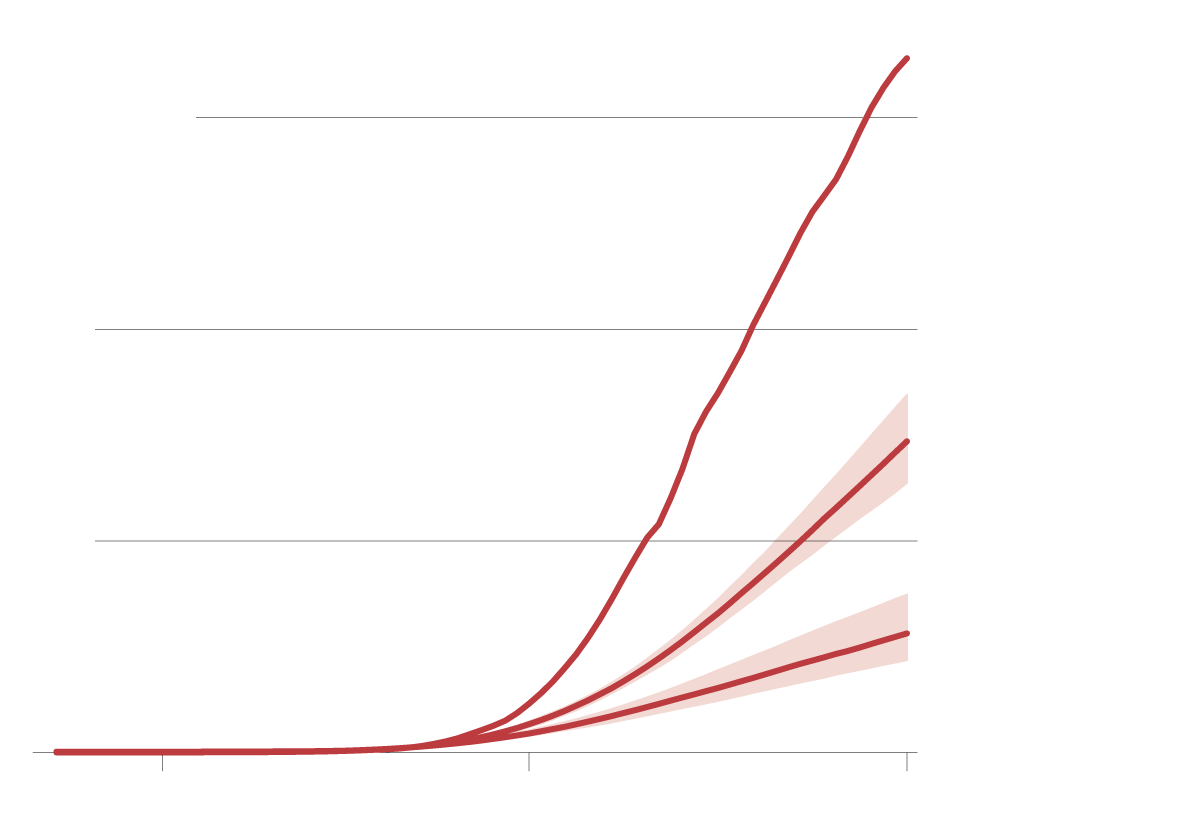 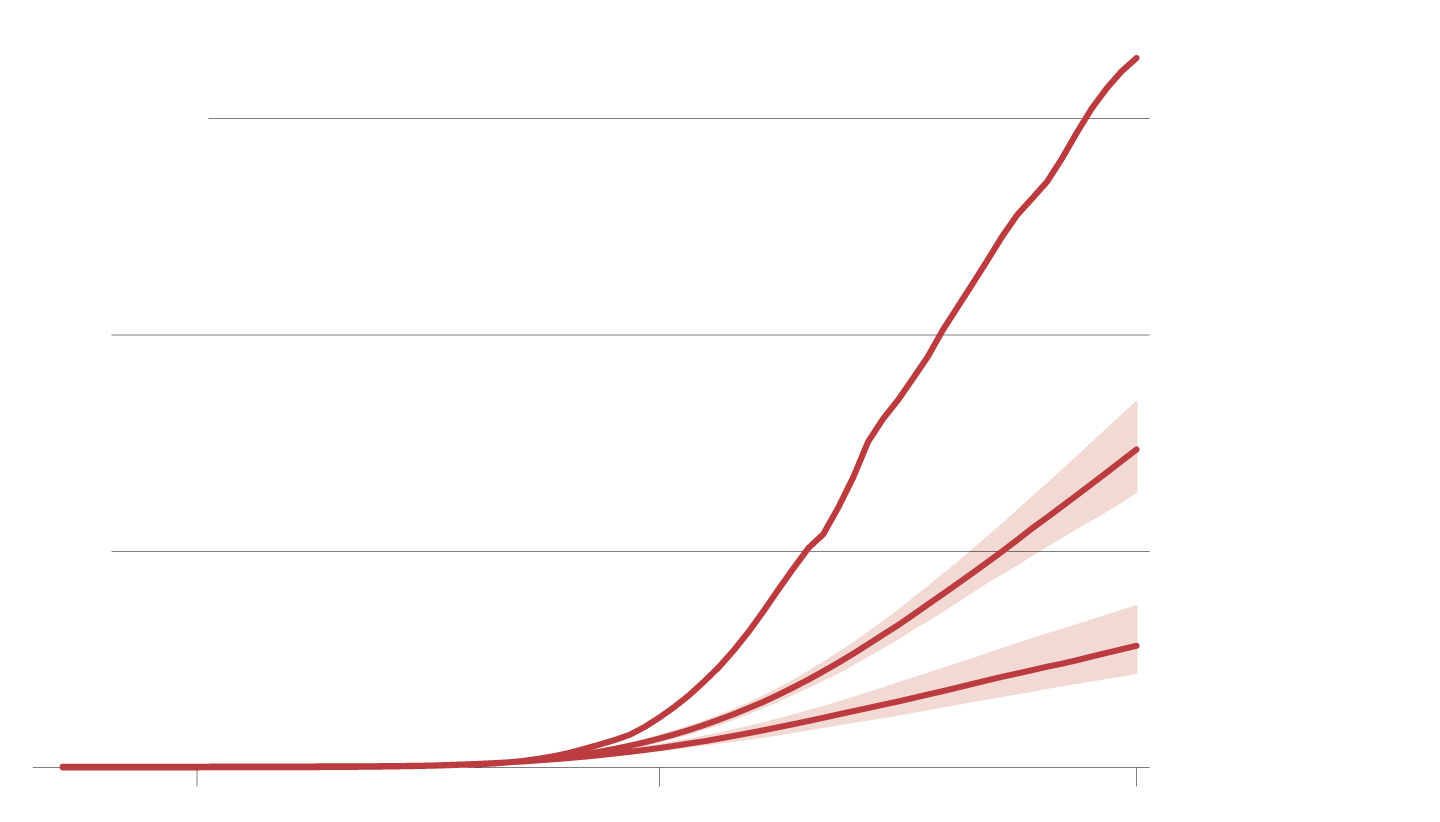 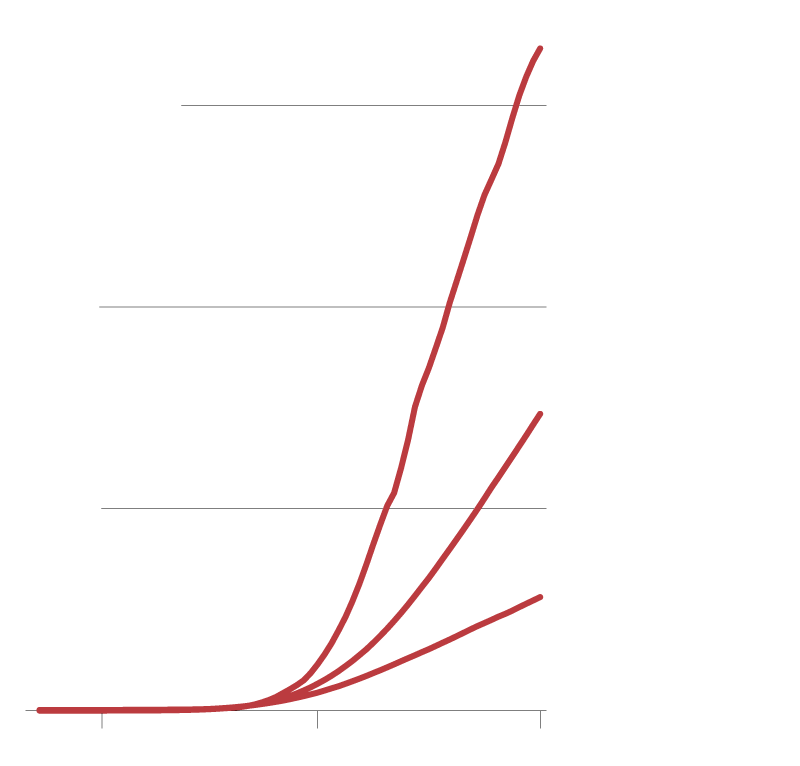 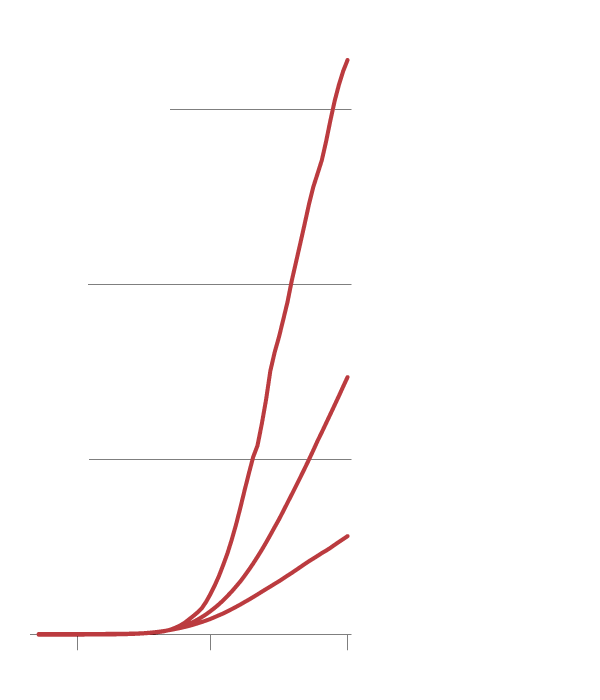 The findings are based on infectious disease modeling that gauges how reduced contact between people starting in mid-March slowed transmission of the virus. Dr. Shaman’s team modeled what would have happened if those same changes had taken place one or two weeks earlier and estimated the spread of infections and deaths until May 3.

The results show that as states reopen, outbreaks can easily get out of control unless officials closely monitor infections and immediately clamp down on new flare-ups. And they show that each day that officials waited to impose restrictions in early March came at a great cost.

After Italy and South Korea had started aggressively responding to the virus, President Trump resisted canceling campaign rallies or telling people to stay home or avoid crowds. The risk of the virus to most Americans was very low, he said.

“Nothing is shut down, life & the economy go on,” Mr. Trump tweeted on March 9, suggesting that the flu was worse than the coronavirus. “At this moment there are 546 confirmed cases of CoronaVirus, with 22 deaths. Think about that!”

In fact, tens of thousands of people had already been infected by that point, researchers later estimated. But a lack of widespread testing allowed those infections to go undetected, hiding the urgency of an outbreak that most Americans still identified as a foreign threat.

In a statement released late Wednesday night in response to the new estimates, the White House reiterated Mr. Trump’s assertion that restrictions on travel from China in January and Europe in mid-March slowed the spread of the virus.

On March 16, Mr. Trump urged Americans to limit travel, avoid groups and stay home from school. Bill de Blasio, mayor of New York City, closed the city’s schools on March 15, and Gov. Andrew M. Cuomo issued a stay-at-home order that took effect on March 22. Changes to personal behavior across the country in mid-March slowed the epidemic, a number of disease researchers have found.

But in cities where the virus arrived early and spread quickly, those actions were too late to avoid a calamity.

In the New York metro area alone, 21,800 people had died by May 3. Fewer than 4,300 would have died by then if control measures had been put in place and adopted nationwide just a week earlier, on March 8, the researchers estimated.

All models are only estimates, and it is impossible to know for certain the exact number of people who would have died. But Lauren Ancel Meyers, a University of Texas at Austin epidemiologist who was not involved in the research, said that it “makes a compelling case that even slightly earlier action in New York could have been game changing.”

“This implies that if interventions had occurred two weeks earlier, many Covid-19 deaths and cases would have been prevented by early May, not just in New York City but throughout the U.S.,” Dr. Meyers said.

The fates of specific people cannot be captured by a computer model. But there is a name, a story and a town for every person who was infected and later showed symptoms and died in March and early April. Around the country, people separate from this study have wondered what might have been.

Rushia Stephens, a music teacher who had become a county court records technician in an Atlanta suburb, collapsed on her bedroom floor, unable to breathe, and died on March 19. Adolph Mendez, a businessman in New Braunfels, Texas, was confined to his own bedroom as his terrified family tended to him until he died on March 26. Richard Walts, a retired firefighter in Oklahoma, was ferried to a hospital in an ambulance and died two weeks later, on April 3.

Mr. Mendez’s widow, Angela Mendez, said she still couldn’t say for sure whether action should have been taken earlier. It didn’t matter now anyway, not for her husband.

“They probably could have had earlier a better way to not let this pandemic go that far,” she said. “But they didn’t.”

Official social distancing measures don’t work unless people follow them. While the measures have enjoyed generally widespread support among Americans, the findings rely on the assumption that millions of people would have been willing to change their behavior sooner.

People are apt to take restrictions much more seriously when the devastation of a disease is visible, said Natalie Dean, an assistant professor of biostatistics at the University of Florida who specializes in emerging infectious diseases. But in early March, there had been few deaths, and infections were still spreading silently through the population.

“If things are really taking off, people are likely to clamp down more,” Dr. Dean said. “Do people need to hear the sirens for them to stay home?”

Dr. Shaman’s team estimated the effect of relaxing all control measures across the country. The model finds that because of the lag between the time infections occur and symptoms begin emerging, without extensive testing and rapid action, many more infections will occur, leading to more deaths — as many as tens of thousands across the country.

The timing and circumstances of those who were infected in March raise haunting questions.

It was a Friday night in mid-March when Devin Taquino began feeling sick. Neither he nor his wife was thinking at all about the coronavirus. There were already more than 200 cases in the state by that time, but most of those cases were in the eastern part of the state, not in the small city of Donora, south of Pittsburgh.

Plus, Mr. Taquino did not fit the profile: he was only 47 years old with no underlying conditions and his main symptom — diarrhea — was not something broadly associated with the disease. He was planning to work a Saturday morning overtime shift at a call center half an hour away, but he called in sick. Offices all over the area were asking people not to come in, but Mr. Taquino’s had not taken that step.

He worked on Monday, but on Tuesday he returned home sick from work, passed out in bed and didn’t wake up for 16 hours. The next morning, his wife, Rebecca Taquino, 42, woke him up and told him they needed to get tested. She didn’t think he had the virus, but she thought it was the smart thing to do.

Without primary care doctors, they went to a nearby urgent care clinic, where they learned that his blood oxygen level was very low. The people at the clinic offered to call an ambulance, but fearing the cost, and still skeptical that this was that serious, the Taquinos chose to drive to an emergency room.

At the hospital, he was given an X-ray and diagnosed with pneumonia. He stayed, kept in an isolation unit just in case, and she returned home. The next evening, March 26, he called her with two developments. One: his work had emailed with the news that someone at the call center, where the work stations sat about a foot apart, had tested positive for the virus. The other bit of news was that he had tested positive.

There has been a lot for Ms. Taquino to think about in the weeks since that phone call, including the long days during which she never left the house and her husband’s situation got more horrifyingly worse.

Should the call center have sent the employees home earlier? When she called the center on Friday to report his condition, it was already empty: the workers had been sent home. Did they act too late?

“I kind of tossed that one back and forth myself,” she said. “I really want to blame it on them, I really do.”

Could she know definitively where he got it? It was hard to say for sure. Still, given that email the day of his diagnosis, it seemed by far the most likely possibility that he got it at work.

After three weeks of agony, Mr. Taquino died on April 10. Whether he was one of the thousands of people who might be alive if social distancing measures had been put in place a week earlier can never be known.

“If it’s spreading that fast you have to know it would have come here,” Ms. Taquino said. “They should have been implementing programs. I think it was a giant lapse in our country. There was no way to think that we were going to be spared from this.”