As a growing number of coronavirus vaccines advance through clinical trials, wealthy countries are fueling an extraordinary gap in access around the world, laying claim to more than half the doses that could come on the market by the end of next year.

While many poor nations may be able to vaccinate at most 20 percent of their populations in 2021, some of the world’s richest countries have reserved enough doses to immunize their own multiple times over.

Vaccine preorders as a percentage of population

Vaccine preorders as a percentage of population

With no guarantee that any particular vaccine would come through, these countries hedged their bets on a number of candidates. But if all the doses they have claimed are delivered, the European Union could inoculate its residents twice, Britain and the United States could do so four times over, and Canada six times over, according to a New York Times analysis of data on vaccine contracts collected by Duke University, Unicef and Airfinity, a science analytics company.

“The high-income countries have gotten to the front of the line and cleared the shelves,” said Andrea Taylor, a Duke researcher who is studying the contracts.

The United States has provided billions of dollars to back the research, development and manufacturing of five of the most promising vaccines against Covid-19, pushing them forward at a speed and scale that would otherwise have been impossible. But the support came with a condition: that Americans would get priority access to doses made in their country.

Other wealthy nations joined the United States in placing large preorders, often with options to expand the deals and acquire even more — undermining many countries’ ability to make timely purchases.

The United States has secured 100 million doses from Pfizer, with the option of buying 500 million more, and 200 million from Moderna, with an additional 300 million on offer. It has also preordered 810 million doses from AstraZeneca, Johnson & Johnson, Novavax and Sanofi combined; expansion deals could push that number to 1.5 billion.

Britain has claimed 357 million doses from all of those companies, along with a small company, Valneva, with options to buy 152 million more.

The European Union has secured 1.3 billion from most of the same companies, as well as the German company CureVac; it can have another 660 million doses if it chooses.

Nearly all of these vaccines have been developed as two-dose treatments. How quickly the wealthy countries will achieve full coverage is uncertain, in large part because the candidates are in varied stages of progress.

Pfizer’s vaccine, developed with BioNTech, is now authorized in Britain, Bahrain, Canada, Mexico, Saudi Arabia and the United States. Moderna’s is expected soon to follow. AstraZeneca, working with the University of Oxford, is likely to seek approval in Britain, India and several other countries in the coming weeks, armed with data from outside the United States, where it has suffered setbacks with regulators.

Valneva has not yet entered clinical trials. Sanofi, working with GlaxoSmithKline, recently changed its approval timetable to the end of next year after clinical results showed a poor performance in older people.

But the outlook for most of the developing world is dire. Because of manufacturing limits, it could take until 2024 for many low-income countries to obtain enough vaccines to fully immunize their populations.

Local vaccine manufacturing may be critical for lower-income countries

Not all of the less wealthy nations will face severe shortages. Some have secured a substantial number of doses that could come on the market next year by leveraging their own drug-manufacturing strengths.

India is on track to produce more doses of coronavirus vaccines next year than any other country. The Serum Institute of India, which has contracts for large quantities of the AstraZeneca and Novavax vaccines, has promised the Indian government half of its output.

“India gets priority because it’s my home country,” Adar Poonawalla, the company’s chief executive, said in an interview.

And the billionaire Carlos Slim has helped fund a deal for 150 million doses of the AstraZeneca vaccine in Latin America, drawing on manufacturing capacities in Argentina and his native Mexico.

The AstraZeneca vaccine is well suited to poorer countries because it is inexpensive and easy to store. Far more doses of AstraZeneca’s vaccine have been promised than of any other candidate: 3.21 billion, over half of them committed to poor and middle-income countries. The company has partnered with 10 manufacturers around the world.

Johnson & Johnson, whose vaccine is being tested as a single dose, making it another contender in the developing world, has pledged up to 500 million shots to low-income countries, without specifying which nations would get them.

China, which has the third-biggest vaccine manufacturing capacity in the world, has indicated that it intends to make its vaccines available to developing countries. Last week, the United Arab Emirates issued the first government approval of Sinopharm, citing preliminary data showing that it was 86 percent effective.

To address vaccine inequity, the World Health Organization and two nonprofits supported by Bill Gates launched an effort to secure a billion doses for 92 poor countries. A billion more would go to dozens of middle- and high-income nations.

Similar to the U.S. government’s investment but on a much smaller scale, the effort, known as Covax, has backed the development and manufacturing of vaccine candidates, including those of AstraZeneca and Novavax. In return, those two companies have promised Covax hundreds of millions of doses.

But the initiative has struggled to raise enough money to meet its target; even if it did, a billion doses would be enough for less than 20 percent of each poor country’s population. 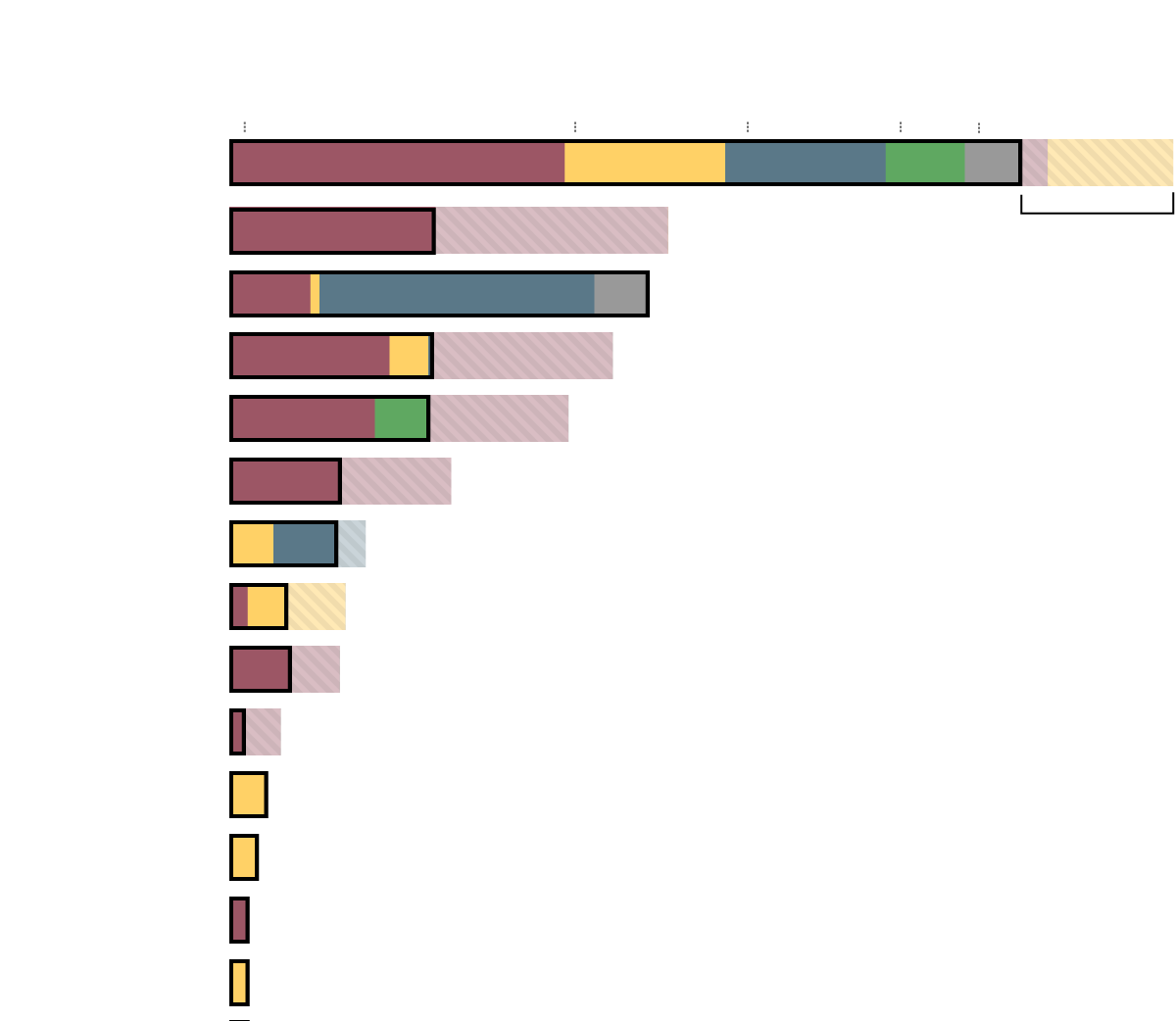 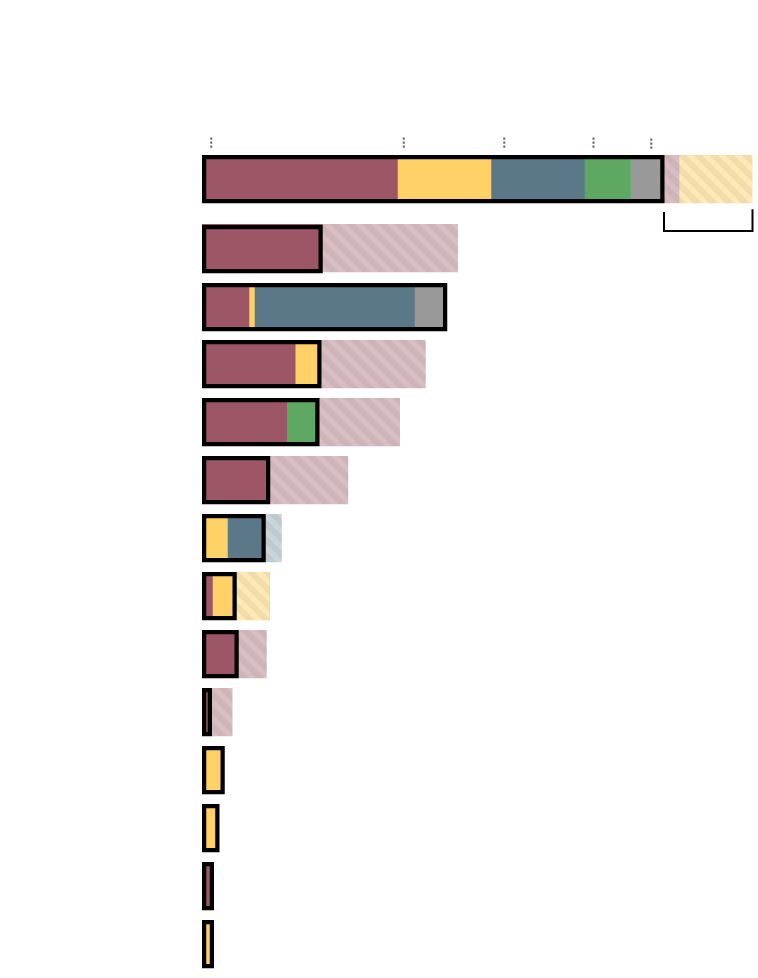 Though wealthy nations have reserved a vast number of vaccines, they have to wait in line to get their orders fulfilled. Manufacturers will need time to ramp up production after getting regulatory approval, and countries will not receive all their doses at once.

“Just because you’ve purchased 100 million doses doesn’t mean you’ll get 100 million doses in December,” said Kendall Hoyt, an assistant professor of medicine at Dartmouth who has studied the global rollout of vaccines.

In their contracts, companies have promised various time frames. Some public announcements specify that doses will arrive in early 2021, while others are more vague, indicating by the end of next year. And because the contracts are private, it has been hard for governments — and the public — to set realistic expectations.

Julia Barnes-Weise, head of the Global Healthcare Innovation Alliance Accelerator, who consults on these agreements, said it was “mind-boggling” that the global supply of Covid-19 vaccines depended on how these confidential agreements were negotiated.

Take Pfizer, which has said that it will manufacture 1.3 billion doses in 2021. The U.S. government bought 100 million, then was caught off guard when it was later told that it would have to wait until June to receive an additional 100 million included as an option under its contract.

And while Pfizer’s vaccines are already flowing to Britain, Canada and the United States, it is unclear when they will arrive in other countries. Mexico, according to an announcement, could get its first vaccines any time in the next 12 months.

Clemens Auer, a chief negotiator for the European Union, said an in an email that its contract with Pfizer for 200 million doses came with a “fixed delivery timetable,” but that he was keeping the details from the public. “Details don’t matter much,” he said, given the high volume of promising vaccines the E.U. had secured.

In Canada, the government has faced questioning over its contract with Moderna. The country secured an agreement in August for 20 million doses, with an option for an additional 36 million. The United States announced a deal for up to 500 million doses shortly after, and Britain and the European Union announced their own deals last month.

Understand Vaccine and Mask Mandates in the U.S.

So when Moderna said recently that its first 20 million would go to the United States, Canadian politicians were accused of letting their country lose its place. It wasn’t widely known that as a condition for receiving U.S. financial support, Moderna had promised Americans its first doses.

In Canadian Parliament, Erin O’Toole, the Conservative leader, introduced a motion requiring the government to post fulfillment dates for its orders, saying that citizens “deserve to know when they can expect each vaccine type.”

Doses may be promised, but production is not guaranteed

Even if other promising candidates, like Johnson & Johnson’s, soon get approval and take pressure off Pfizer and Moderna, there’s no guarantee the companies will be able to satisfy their commitments next year.

“People think, just because we’ve demonstrated in Phase 3 clinical trials that we have safe and effective vaccines, that the spigots are about to be turned completely on,” said Dr. Richard Hatchett, head of the Coalition for Epidemic Preparedness, one of the global nonprofits leading the Covax program with the W.H.O. “The challenges of scaling up manufacturing are significant, and they are fraught.”

Some companies have already revised their projections based on manufacturing issues. Pfizer initially said it would produce 100 million doses by the end of this year, only to cut that number in half. Novavax delayed clinical trials in part because it couldn’t make enough doses.

In other cases, vaccine makers or their partners may have promised more doses than can be produced: 3.21 billion doses of the AstraZeneca vaccine have been committed, but manufacturing deals are in place for only 2.86 billion, according to Airfinity. Johnson & Johnson has pledged 1.30 billion but secured manufacturing for only 1.10 billion.

Pfizer’s and Moderna’s commitments are on par with their production abilities, but there appears to be little room for growth.

The companies’ commitments include not just preorders, but also expansion deals, which may not all come to fruition. Like the countries, the companies are also hedging their bets.

Rich countries are being told to share rather than hoard

As stark disparities in vaccine access become more visible, there is mounting pressure on wealthy countries to alter their plans.

Australia, Britain, Canada and the European Union have all made financial commitments to Covax. Now, they are being encouraged to stagger the delivery of their own doses so the developing world won’t be stuck at the end of the line.

“The worst possible outcome is you’re offering vaccines to a whole country’s population before we’re able to offer it to the highest-risk ones in other countries,” said Dr. Bruce Aylward, a senior adviser to the W.H.O.’s director-general who is working on the global vaccine initiative.

Rich countries, which may well end up with more doses than they need, are also being asked to donate vaccines. Canada has already begun discussions about how it might do that.

So far, the United States has been glaringly absent from efforts to address vaccine inequities. It has provided no assistance to Covax, and President Trump has promoted vaccine nationalism at every turn.

But he signed an executive order this month stating that once the federal government determines there is a sufficient supply for Americans, it will facilitate international access to its vaccines “for allies, partners and others.”

And with President-elect Joseph R. Biden Jr. a month from taking office, Covax officials hope the United States will do more. Mr. Biden has already pledged to reverse his predecessor’s withdrawal from the W.H.O.

But even if rich countries donate their excess vaccines, the rest of the world will not have all the doses it needs by the end of next year.

Some experts predict it will be 2024 before there is enough vaccine. Others, like Dr. Hatchett, think that as more people get sick and acquire natural immunity, the need for the vaccine will diminish and the supply will be adequate by late 2022.

Either way, many more people will die along the way.

And if it turns out this is a vaccine that is required every year, like the flu shot, that will change the projections entirely, said Dr. Krishna Udayakumar, director of the Duke Global Health Innovation Center.