Some of the worst days of Covid in the U.S. have come as winters have settled in, and surges led hospitals to overflow and caused hundreds of thousands of deaths.

A comparable surge has yet to materialize on a similar timeline this winter. By now, hospitalizations in particular would have started to sharply rise. Instead, data suggests that more of a Covid bump than a surge has emerged. Recent hospitalization figures are much lower than the past, largest surges, as this chart by my colleague Ashley Wu demonstrates: 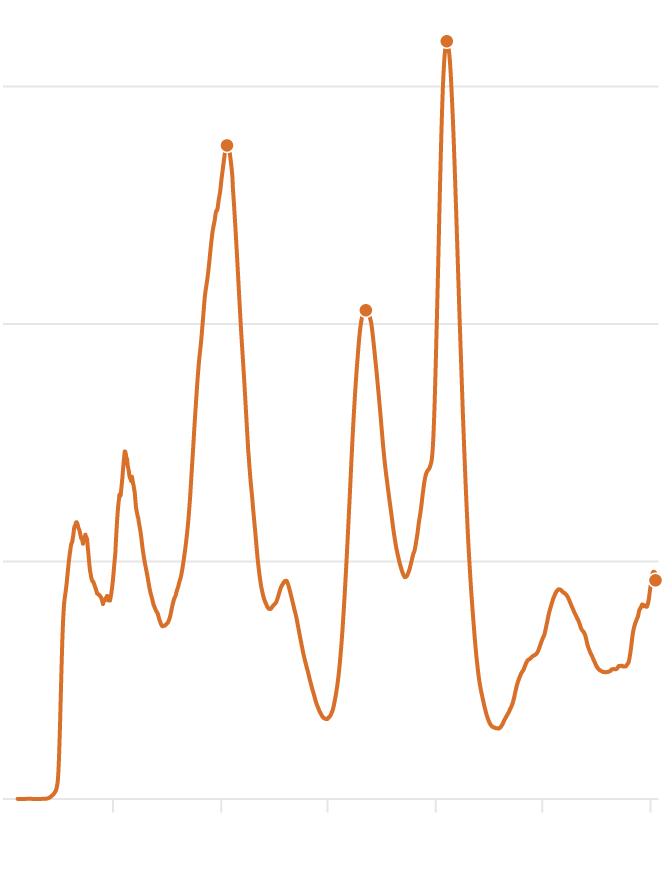 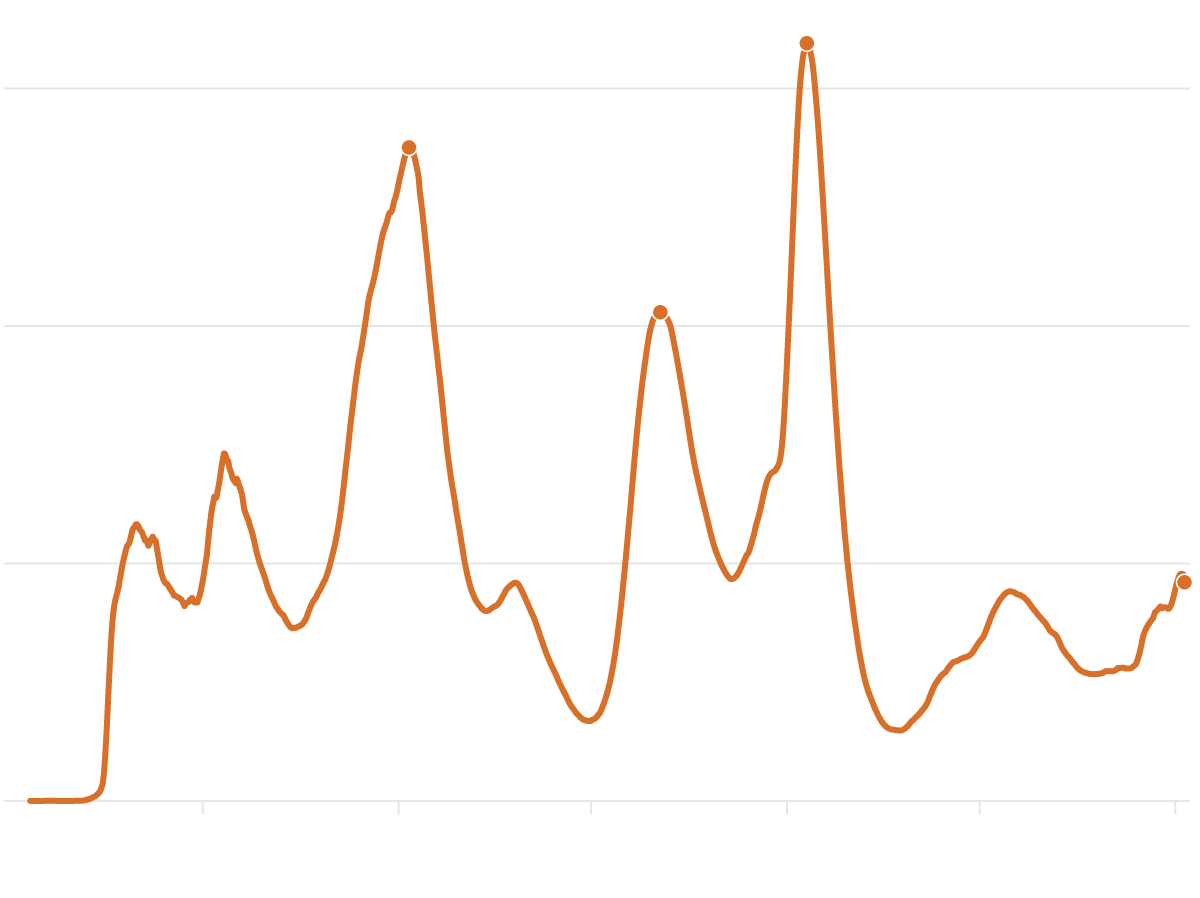 There is some geographic variation. Covid hospitalizations have risen more quickly in the Northeast and South in recent weeks, potentially driven by a new Omicron subvariant. But even there, hospitalization levels are closer to the summer increase caused by the Delta variant in 2021 than to the following winter surge caused by the Omicron variant.

Some Western states are reporting among their lowest hospitalization rates since the pandemic began. 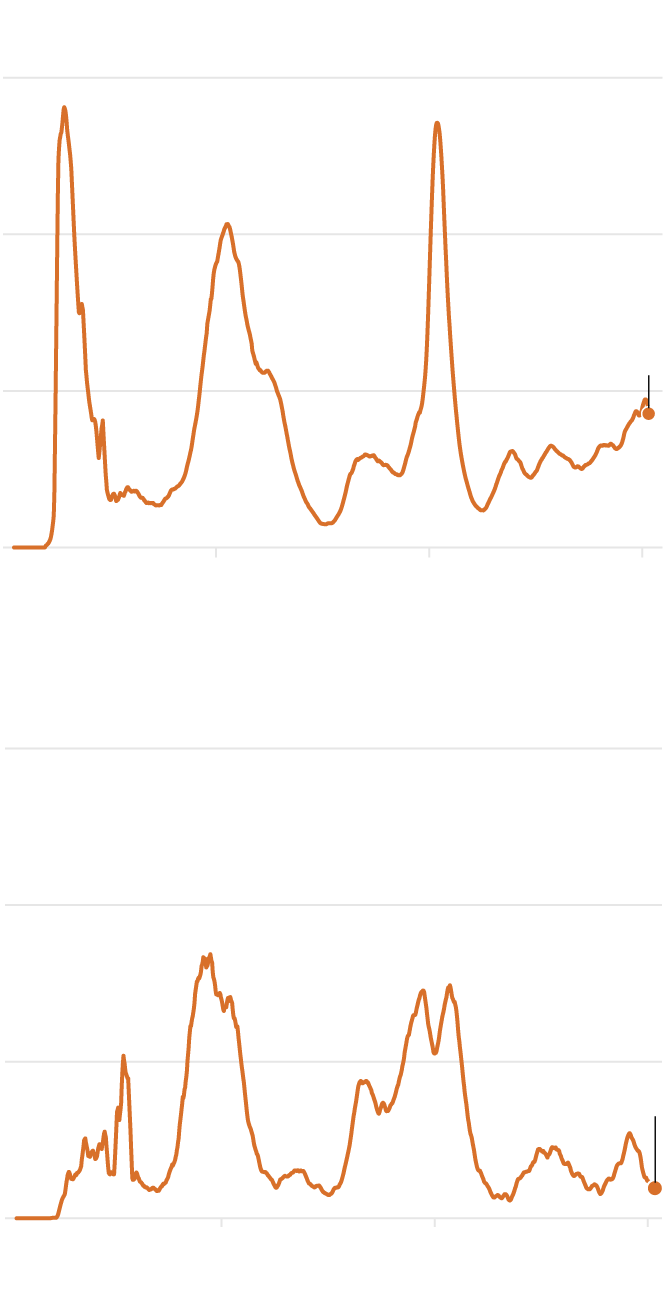 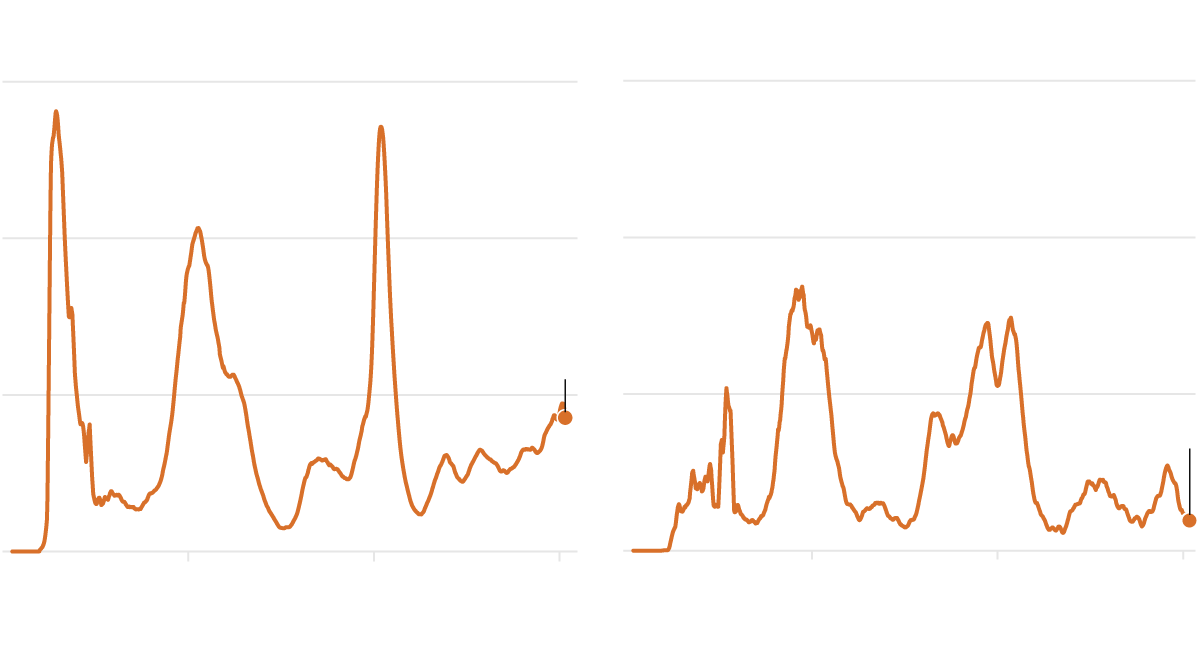 After years of winter surges, the absence of one translates to potentially tens of thousands fewer deaths and is worth celebrating, even if it ends up being a temporary reprieve. Today’s newsletter will look at the lack of a winter surge so far and what that means for Covid’s future.

Why have we avoided the typical winter surge? Because the U.S. population has, collectively, built up immunity to the virus. Much of that is thanks to vaccines and boosters. But repeated exposure to the virus and infections have played a significant role, too.

Anecdotally, experts and others still report a lot of sickness around them — but not hospitalizations or deaths. This is the outcome you would expect to see with Covid in a population with higher levels of immunity: Vaccines and past infection seem to offer strong protection from the worst outcomes of the virus, but they don’t fully prevent infection and milder disease.

“What you’re seeing is a transition to ongoing transmission but much milder infections,” said Dr. Céline Gounder, a senior fellow at the Kaiser Family Foundation.

People’s actions may have suppressed a winter surge, too. In the fall, experts and news outlets warned of a possible simultaneous surge of Covid, flu and R.S.V. Some Americans may have responded by behaving more cautiously — for example, by wearing masks in public and avoiding larger gatherings. But those behavior changes are not widespread, certainly not to the levels of 2020.

An important caveat to all of this: The data is messy. Covid case totals in particular are unreliable because fewer people are testing and reporting results.

Even the counts for hospitalizations and deaths are less accurate than they once were. For example, someone may show up to the hospital for an issue unrelated to Covid, test positive for the virus and get marked down as a Covid hospitalization. Massachusetts officials estimate that only about one-third of people hospitalized with Covid are actually there for Covid-related illness.

But that phenomenon indicates that Covid hospitalizations are overcounted, which would mean that, if anything, the data overstates the size of the current bump.

It amounts to a victory for public health: Vaccines have managed to tame Covid, relative to 2020 and 2021.

The good news does not mean that Covid is now a concern of the past. 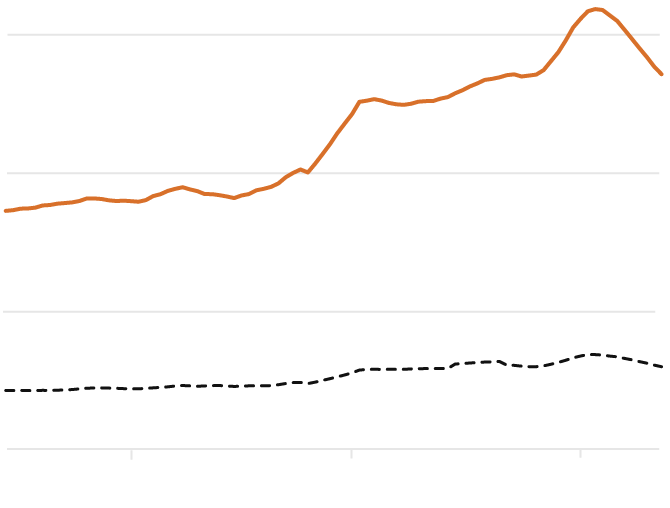 If public health interventions helped tame Covid this winter, then relaxing too much could lead to a surge. But experts aren’t envisioning a return to 2020-style lockdowns or constant masking and testing.

Their recommendations are less demanding: Get boosters, isolate when sick and mask in indoor public spaces if the virus is quickly spreading. And medications like Paxlovid should be available for those who are sick. (They aren’t currently available enough because doctors are still too reluctant to prescribe Paxlovid, especially to older patients, experts warned. I’ll write about that issue in a future newsletter.)

“We’ve made progress. We are getting ahead of this. People know what to do,” said Saskia Popescu, an epidemiologist at George Mason University. “But it worries me, because people also use that progress as an excuse to not be as vigilant and not take it so seriously.”

Americans are fighting over history. Those who study it are in increasingly short supply, Daniel Bessner writes.

House Democrats, in the minority, appear united. It’s up to Hakeem Jeffries to keep them that way, Ross Barkan writes.

Truffle wars: Hunting for “black gold” can be dangerous for dogs.

Messy monarchies: The British aren’t the only ones with royal drama.

Negotiation: There is an art to asking for a raise.

A killer wardrobe: For a deadly doll in “M3gan.”

Advice from Wirecutter: Stay fit with an old-school exercise bike.

Lives Lived: Gina Lollobrigida was an Italian movie actress who became a major European sex symbol. She had a second career as an artist and filmmaker. Lollobrigida died at 95.

SPORTS NEWS FROM THE ATHLETIC

Cowboys rout Bucs: Dallas advanced to the next round of the playoffs with a 31-14 win in Tampa Bay last night. Tom Brady was noncommittal on his future after the game.

College football: After flirting with N.F.L. openings, Coach Jim Harbaugh said yesterday he would return to Michigan for a ninth season.

The “S.N.L.” of sabermetrics: Data runs baseball. It wasn’t always that way. Most of it started in 1995 with a dial-up internet connection.

How to text your crush

Dating apps have been around for a generation, but relationship coaches often gloss over digital communication skills, leaving single people on their own. Texting-focused dating courses are trying to help, Sara Radin writes in The Times.

Among the questions they attempt to help their clients answer: What’s a great first message to send on a dating app? How do you flirt in a way that’s not creepy? What if the recipient doesn’t respond?

“I text now with purpose and intention,” said Dan Leader, who took one such course. “I ask questions to get to know the person and so they can get to know me. Then I make a clear plan to set a date at an appropriate time. I no longer feel the need to keep the conversation going with small talk.”

Instant pistachio pudding mix is the secret of this Bundt cake.

“Rikers: An Oral History” describes the shock inmates feel upon entering the run-down and lawless prison.

The pangram from yesterday’s Spelling Bee was weaving. Here is today’s puzzle.

And here’s today’s Wordle. After, use our bot to get better.

Thanks for spending part of your morning with The Times. See you tomorrow. — German

P.S. The Athletic is bringing on a team of editors and writers to cover two of the biggest soccer teams in the world, Barcelona and Real Madrid.

“The Daily” is about China’s Covid shift.

Sign up here to get this newsletter in your inbox.