What is ranked-choice voting?

Instead of casting a single vote for a single candidate, voters in a ranked-choice system select a set number of candidates in order of preference. In New York’s mayoral primary, voters will be allowed to choose up to five.

What types of elections use it?

In the U.S., ranked-choice voting is most commonly used by cities for local elections. Only Maine uses it at the state level, though Alaska will soon join it after passing a ballot measure last November.

In New York City, ranked-choice voting will be used for local primary and special elections; it will not be used in the city’s general election on Nov. 2, or to elect candidates to county, state or federal office.

How do I fill out my ballot?

You’ll mark your preferences by filling in a numbered bubble next to each candidate’s name. (See? That SAT prep turned out to have real-world value, after all.)

You can rank as many candidates as the ballot allows, just one candidate, or anything in between. 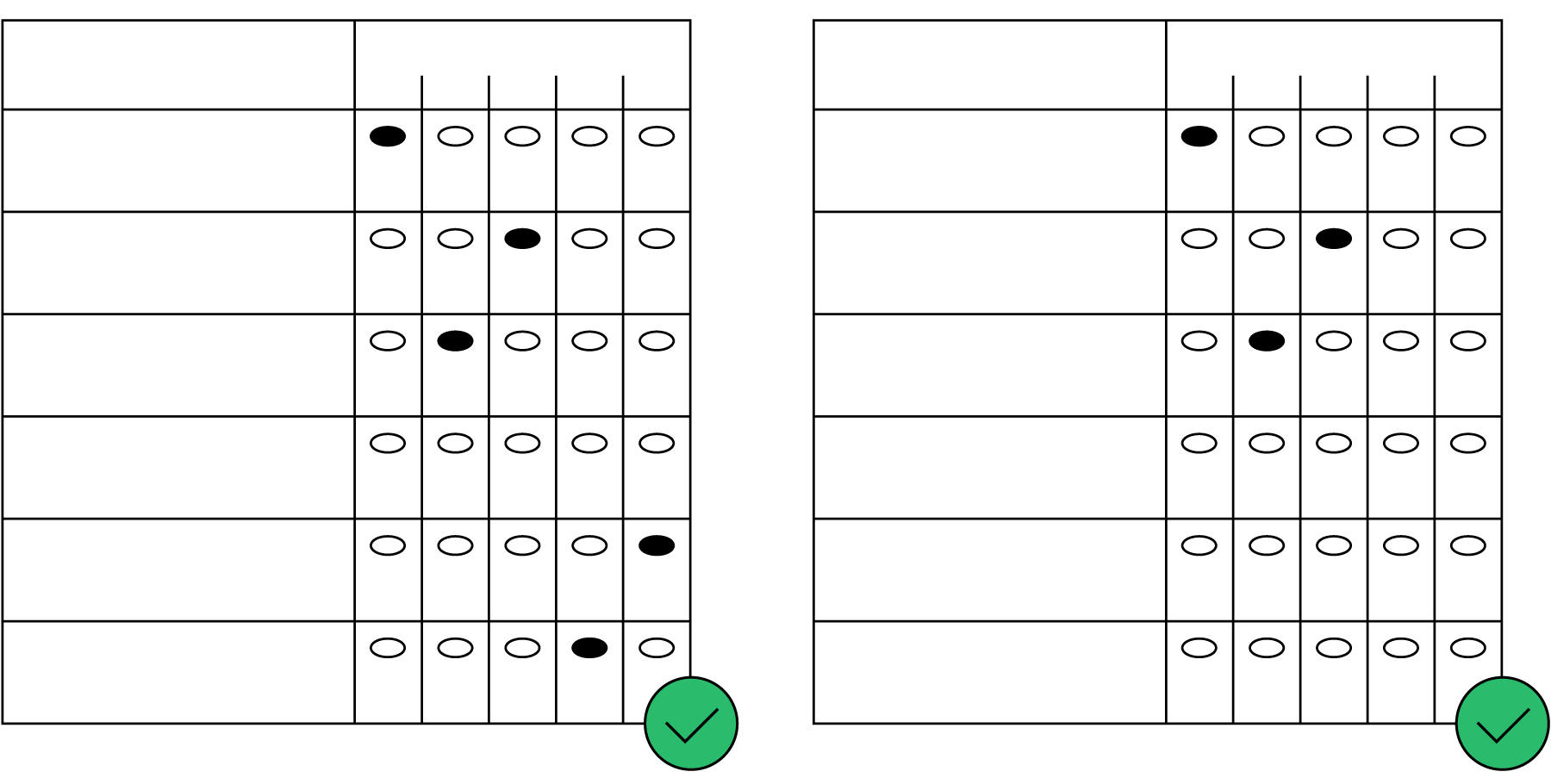 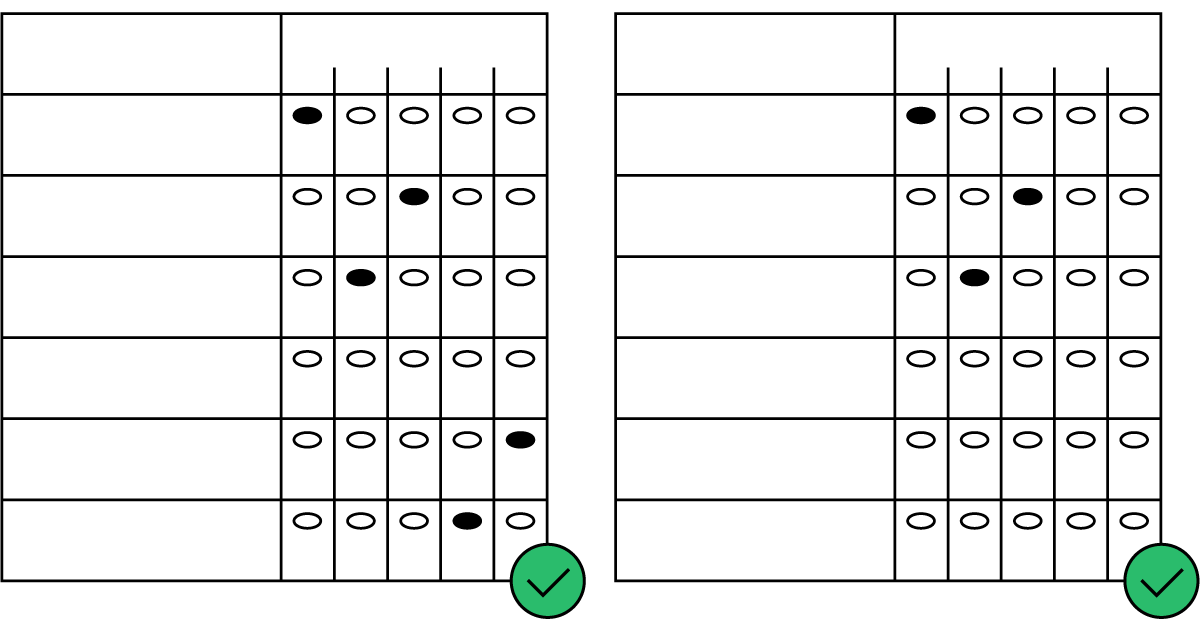 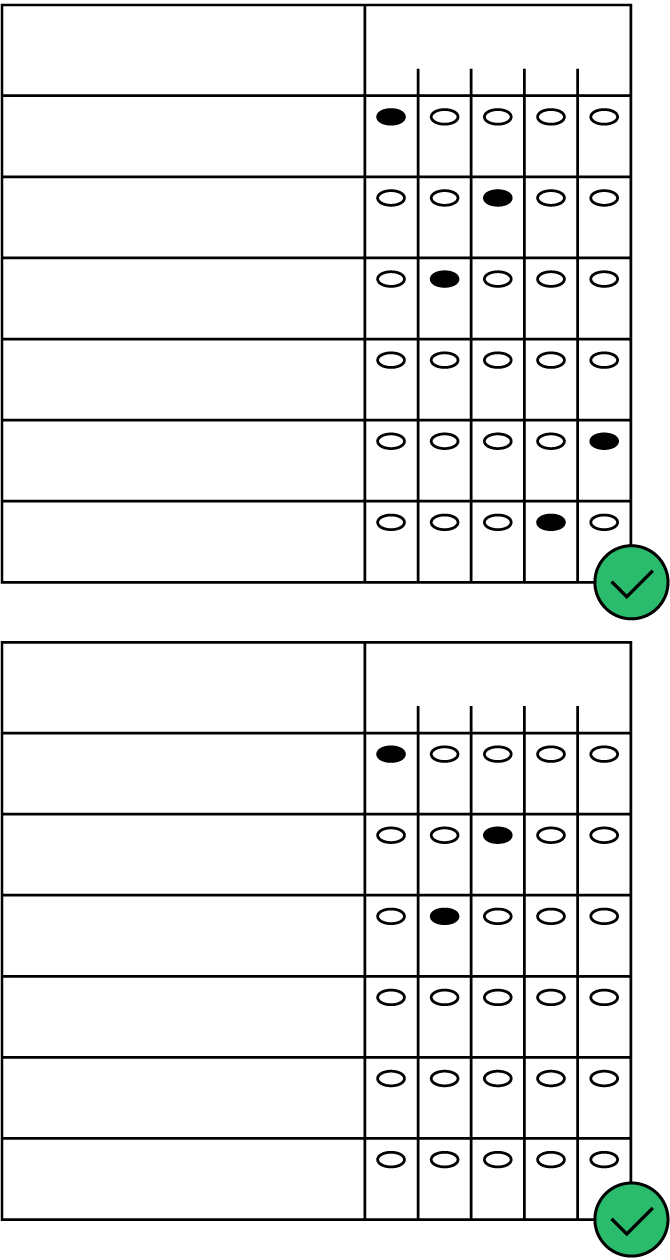 How does someone win?

Think of ranked-choice voting as voting in rounds: If a single candidate receives more than 50 percent of first-choice votes in the first round, then he or she wins, and that’s the end of the race.

In New York’s primary, these rounds of elimination will continue until there are two candidates left — even if a candidate collects more than 50 percent of votes before the very end. The candidate with the most votes in the final round wins. In each round, when a candidate gets eliminated, his or her votes get redistributed to whoever was ranked next on the ballot.

Tap through to see how that could work.

So I’m voting for five candidates? This sounds illegal.

We promise you, it’s not. You’re still ultimately casting one vote for one candidate: Just think of your vote as transferable. If your first choice is eliminated, then your vote transfers over to your next choice.

Is it still OK to choose just one candidate?

Candidates, hard drives, Saturday night plans — whatever it is, it never hurts to have a backup.

This is complicated! How do I not mess this up?

Read your ballot! It will outline who you’re voting for and how many people you’re allowed to rank.

Don’t rank the same candidate more than once, like you’re trying to vote for them five times — it will count for only one vote. Nor should you rank more than one candidate in the same spot. That will invalidate your ballot.

Voting machines shouldn’t accept incorrectly completed ballots, so don’t lie awake at night worrying that you’ve messed something up. If you vote in person, you’ll receive an error message and be given a new ballot.

Laws also require some election boards, including the one in New York, to contact voters to fix certain issues that might disqualify their mailed-in ballots. If you realize you’ve made an error on your ballot, but you’ve already mailed it in, you can call the Board of Elections and request a replacement. 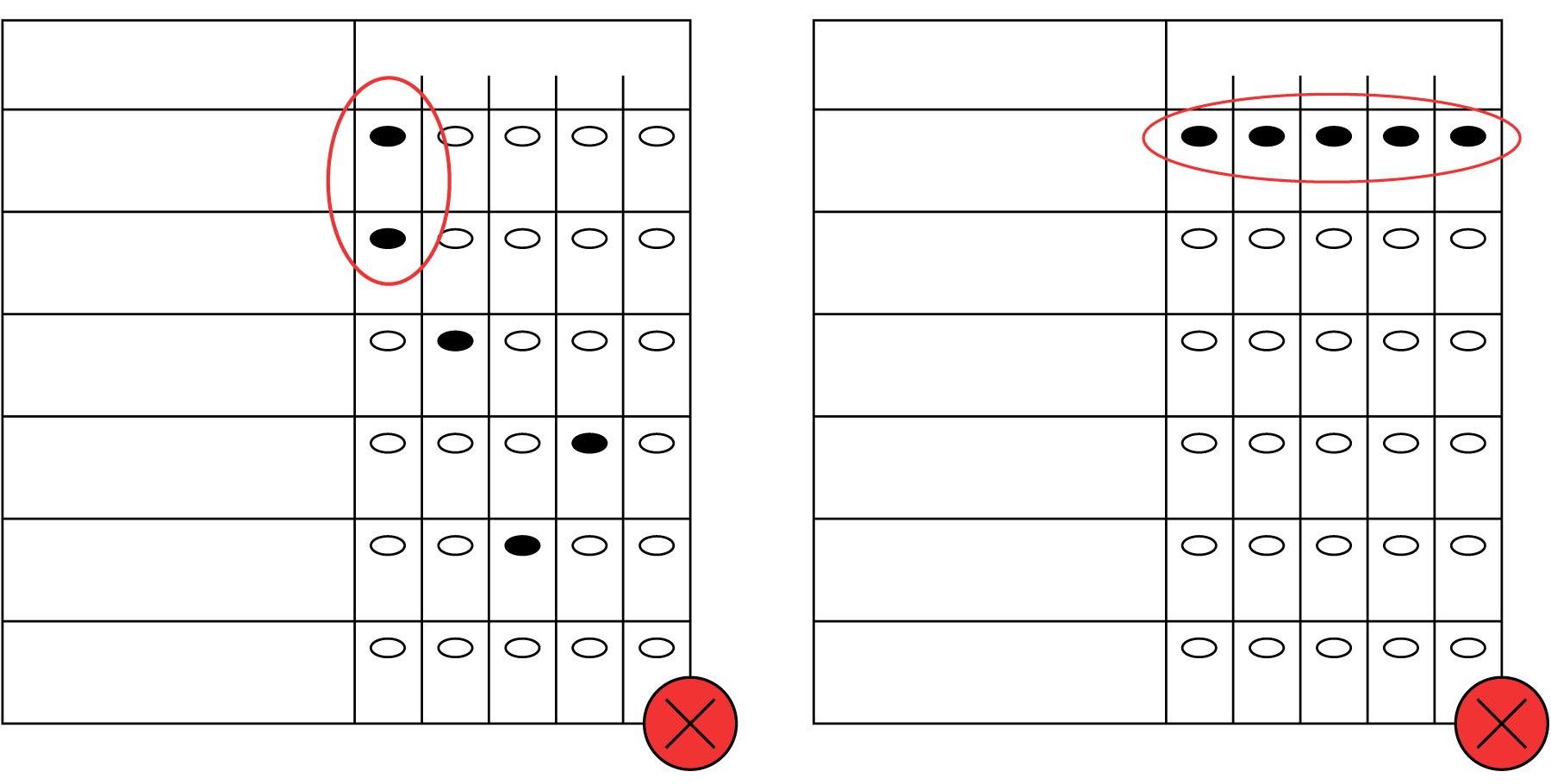 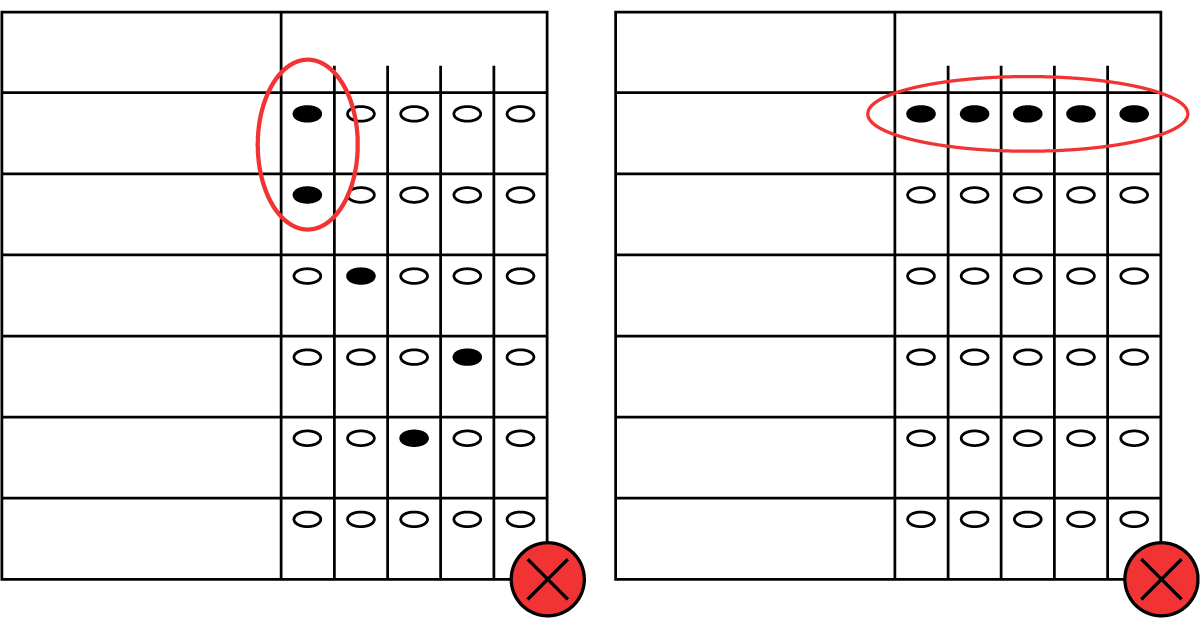 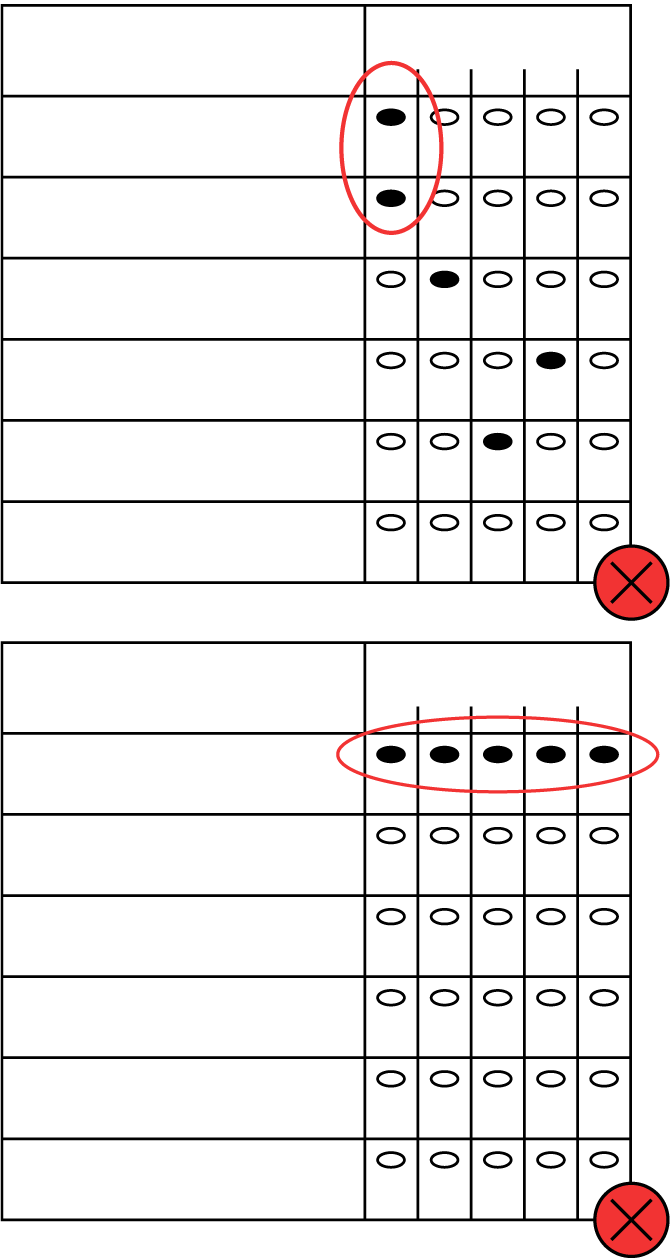 I’ve heard it’s possible for the candidate in first place to lose. How does that make sense?

This is a case in which a candidate receives a plurality of votes in the first round but not the majority of them.

Say Sarah receives 40 percent of first-choice votes, Eden gets 35 percent and Jazmine gets 25 percent. Even though Sarah is in first place, she hasn’t secured a majority.

In the next round, Jazmine is eliminated, and the votes for her are transferred to whichever candidate her voters listed second. Then the votes are recounted.

If most of the voters who ranked Jazmine first list Eden as their second choice, then Eden may end up overtaking Sarah and winning the election.

Now do you see why we needed to write this guide?

Tap through to see another example.

A few, including Ireland, India and Australia, have used ranked-choice voting in certain nationwide elections for years.

When is the New York primary and which offices will I be voting for?

New Yorkers registered with a political party can vote in that party’s primary election on June 22, or during the early voting period of June 12 to June 20.

In addition to the mayor’s race, you’ll also be ranking candidates for borough president, comptroller, public advocate and City Council.

The crowded Democratic primary for Manhattan district attorney is also on June 22, but because it is a county race, voters will not be ranking the candidates.

How will this change Primary Day?

It shouldn’t change your day at all — if you’re voting in person, you’ll still show up at your polling site, fill out your ballot and hope that there are some stickers left for you to take a picture and post it on your Instagram story.

How long will it take to learn the results?

The results of in-person voters’ first-choice candidates will be announced the night of the primary, so we’ll know pretty early which candidate is in the lead.

But, at least in the crowded mayor’s race, it’s likely that the official results won’t be certified for a few weeks.

Because of a state law, absentee and affidavit ballots don’t get counted until a few days after the election, and experts expect a higher-than-usual number of absentee ballots because of the pandemic. The Board of Elections reviews all these ballots to determine their eligibility, and gives voters time to fix mistakes, a process that can take several weeks.

Once all the votes (early, day-of, absentee and affidavit) have been tabulated, then the rounds of elimination — and the drinking games — can begin.

How many rounds should we prepare for?

If a candidate wins more than 50 percent of the vote in the first round, there are no further elimination rounds, and that candidate is declared the winner.

But given the number of candidates on the ballot — at least on the Democratic side — experts are betting that we’ll go through the multiple-round process for the mayor’s race.

Who Wants to Be Mayor of New York City?

We’re still in a pandemic. Can I mail in my ballot or vote early?

Yes. If you want to avoid people, pandemic or not, remember that the last day to request an absentee ballot is June 15. Ballots must be postmarked or delivered to the Board of Elections by June 22 (except for military and temporary federal voters, whose deadline is May 7).

In-person early voting, again, lasts from June 12 to June 20. Find your polling place here, and note that your early voting and Primary Day voting locations may be different.

Can I rank a write-in candidate?

Is ranked-choice voting better than the old way of doing things?

Proponents say ranked-choice voting enables people to more fully express their preferences: You don’t have to choose between a candidate you love and one you’re just OK with but you think has a better chance of winning. Voters really can have it all.

Political scientists suggest that ranked-choice voting is more welcoming to more long-shot candidates because voters can indicate their interest without feeling like they’re “wasting” their single vote.

There’s also evidence that ranked-choice voting encourages more candidates to run, especially women and people of color, and that it discourages negative campaigning, since candidates are no longer competing for a person’s only vote.

Is there any downside to this system?

Mostly that people aren’t used to it. Many experts say there’s evidence that any time you change the way people vote, there’s a potential for negative consequences like an increase in invalidated ballots and lower voter turnout, which is why voter education efforts are so important.

“Ranked-choice voting tends to be an acquired taste,” said David C. Kimball, a professor of political science at the University of Missouri-St. Louis. “It does take a serious voter education campaign to help voters understand the new rules and how they work and how the votes are counted.”

Some experts also believe that the system privileges incumbents: “If you have a decent amount of name recognition and people think you can do a decent job, you can get enough number two votes to stay in office,” said Peter Ragone, a political adviser who worked on Mayor London Breed’s campaign in San Francisco.

How does ranked-choice voting change the way candidates run for office?

Fans of ranked-choice voting often point out that candidates have to show that they would be a good representative for everyone. Candidates may highlight similarities with their rivals, or even form alliances, in an attempt to gather second- and third-choice votes as well as first-choice ones.

“It allows people to have the confidence to make a case for themselves, whereas in other scenarios, their campaigning would’ve been directly in opposition to another candidate,” said Sochie Nnaemeka, the state director of the New York chapter of the Working Families Party.

Of course, sometimes candidates form alliances based not on ideological similarities, but on a desire to take down the front-runner — so negative campaigning isn’t totally eradicated.

Why is New York City using this system now?

You might’ve voted for it! Nearly 75 percent of New York City voters supported ranked-choice voting in a 2019 ballot measure.

The system has already been used this year in special City Council elections in the Bronx and Queens. Rank the Vote NYC, an advocacy group, polled voters after two special elections in Queens, and found that people fared just fine: An overwhelming majority of voters found their ballot easy to fill out, and most of them ranked more than one candidate.

Wasn’t there a lawsuit to stop this from happening?

Yes. Last December, six members of the New York City Council filed a lawsuit in an attempt to delay the city from moving to ranked-choice voting, claiming that without an adequate amount of voter outreach and education, the new system would disenfranchise voters of color and those with limited English proficiency.

The New York State Supreme Court denied their request. In April, those same City Council members filed another lawsuit, alleging that the Board of Elections’ education outreach had still not properly prepared voters for ranked-choice voting, citing a recent poll that showed high numbers of Black and Latino voters didn’t know anything about the new system.

The city is on track to spend $2 million on public education efforts, including advertisements and trainings.

What’s the best strategy if there are candidates I really don’t want to see win?

Easy: Don’t vote for them! Vote for the person you most want to see in office.

But if you really want to be petty, you should rank the candidates you believe are most likely to take down your least-favorite candidate up high, which will pull power away from your nemesis. The enemy of my enemy…

Keep track of who is still in the mayor’s race with our candidate tracker. And go here to get the latest news on the race.